The Gunk on Glycerine and Its uses for Medicine Making 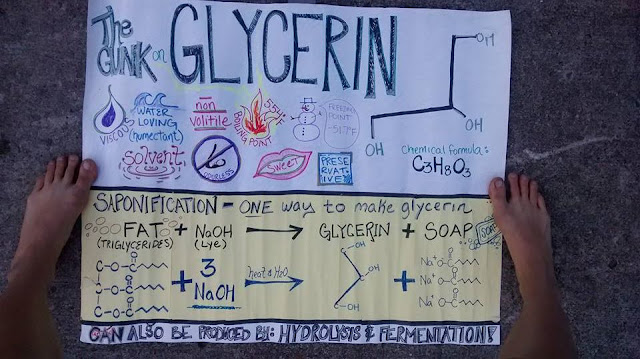 This carbon backbone is the sweet component of glycerine and because of that when Carl Wilhelm Sheele discovered the compound in 1779 he called it the "sweet principal of fat"
Because of Glycerine's origins it has very unique properties ​here are some of them:
Here are some of the common uses for Glycerine:
Brain challenge: Based on the properties list and uses list above can you figure out why it is commonly used in the above products? It might be more than one for each!

Medicine making with Vegetable Glycerin (VG): (ethanol is indicated by OH below)
-Does not affect blood sugar and is suitable for those who do not want OH
-Solvent - overall ½ the power of OH *below indicates higher extraction than ethanol
-Extracts - salts, acids, alkaloids, *tannins (witch hazel) and *mucilage (marshmallow)
-50% VG will act as a preservative (if using fresh plants higher is needed)
-Glycerine/water extracts have a 1-3 year shelf life
-Compatible with other compounds used in medicine making
-Has been used to treat constipation, decrease pupil size (ophthalmic agent), and as an emollient

Ways to use in medicine making:
-Add in small amounts to OH based tinctures to reduce precipitate of tannins and mucilage
-Make a glycerite (glycerin tincture) from fresh or dried plant material. If using dried plant material also add water to your tincture. If using fresh keep the VG percent higher, 75%-100%, depending on moisture of the plant you are using.
-Unlike OH VG holds up well to heat so you can make tinctures quickly. Do this using the quick crock pot method (tincture in jar inside crock pot, crock pot on warm – not too hot!)
-When formulating – try adding in a portion of a glycerite in to alter taste of medicine
-In lotions/salves/balms/toothpastes to keep them fresh longer and act as a preservative
-Since VG boiling point is higher than OH – a final product without OH can be made with glycerin using the benefits of OH as a solvent (Process sometimes called Replacement.)
1. Start with a tincture that contains some alcohol and at least half glycerin.  2. Let macerate.
3. Remove lid and heat until your original volume of glycerin is reached – this will remove any alcohol and water. You can then add back in water and/or more glycerin to reach original volume.
Contraindications:
-Check your source – if for internal use should be labeled USP - United States Pharmacopeia. Organic options are also available.
-Can act as a skin irritant (burning, itchy, red or stinging) – especially when full strength
-Allergies to Glycerin are rare. Symptoms include rash on body, dizziness or trouble breathing.
-FDA in 2012 – declared glycerin derived from Jatropa genus (common name: nettle spurge family Euphorbiaceae ) which is often used to make bio-diesel, may contain toxins

Promote Your Page Too